London is becoming one of the world’s best cities for coffee. With over 400 billion cups of coffee consumed each year worldwide, and the UK spending about £1 billion on coffee alone, coffee is undoubtedly one of the most popular drinks. Once you’ve tasted a real brew, there’s no going back. The subtlety and flavour of carefully selected and well-roasted beans, combined with skilled milk frothing changes everything.

Coffee as a lifestyle motif has infiltrated Instagram, creating a frothy world of milk art, café culture and avocado on sourdough. A flat white cradled by perfectly manicured nails, a macchiato draped in soporific light, a Matcha latte shot from a bird’s eye perspective flood…the list goes on. The site is awash with perfectly lit shots of latte art and on-trend cafés with bare brick walls and wooden counters. Some of the best coffee shops have a definite industrial chic look – exposed brick, pale wood, mismatched furniture, and simple light fittings – that differentiates them from chain outlets. Like the coffee, everything is either stark white, clean lines, and Scandi chic, or dark and dimly toned, brooding an urban cool. Coffee seems to have become as integral to that lifestyle aesthetic as the Apple devices used to capture it.

But this is all part of the theatre of going to a coffee shop. Although the best coffee can take a bit longer to make, watching your coffee being made is a fun visual experience. Those few minutes of waiting is an enforced moment of calm and reflection away from London’s relentless beat. People take coffee seriously because of the sense of occasion that goes with it. 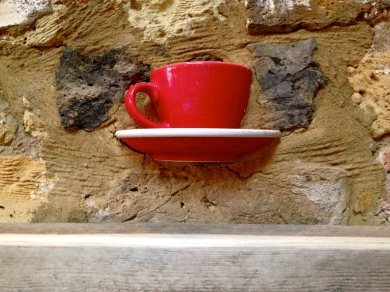 Coffee is embedded into the daily rhythms and rituals of the City. Burning the midnight oil often requires a dose of caffeine, whilst meetings take place over a casual coffee. Coffee shops are also thoughtful settings to read and write, catch-up with friends, and just linger. These posts not only review whether the coffee is top notch, but also the atmosphere and the friendliness of your barista – the secret ingredient to a good brew.

In the winter months, the aroma and warmth of good coffee also plays an important part of its enjoyment; I often need nothing more than to be wrapped up in a caffeine blanket. A cup of coffee is also my thinking drink, or in the word’s of Gail’s coffee cups, my “cognitive therapy”. Tired of chain lattes and armed with my “Beanhunter” app, I enjoy exploring London’s ever-expanding coffee scene, as new independent coffee shops are launched all the time, whilst artisan coffee bars expand into empires.

With new coffee shops and stalls opening every week, there’s never been a better time to learn about a bean that’s directed a significant part of world history since the 17th century. Not only are coffee shops a fertile site for the exchange of ideas and information today, but they have been since the 17th century. Early coffee houses were important meeting places where men (and it was almost wholly men) would gather to strike deals, argue about politics, and share gossip, forging a creative, convivial environment. Governments of the day hated and feared these establishments, where for just a penny people could gather to read newspapers and debate political affairs.

Here are some snapshots of some of my favourite coffee shops creating this buzz today. My comments are based on the style of coffee I drink (oat/soya/almond milk flat white/latte) and are organised by location. I hope this will inspire you to enjoy speciality coffee at new and exciting cafes, wherever you’re based. As a staple of our daily lives, more people should enjoy and appreciate what great coffee is all about.

Welcome to Yumtini, a journal of my adventures across the foodscape of London and beyond. Covering cafés and restaurants (Eating out), coffee hot-spots (What’s brewing?), products that I love (Yummies) and food that I cook (Eating in), this blog is a creative outlet in which I can share the things I enjoy in life: food, photography, London and travel. As I work in the City, I also recommend grab-and-go lunch spots, as well as recipes for quick bites you can rustle up yourself.