Coal Drops Yard is one of those regenerations people might be initially sceptical of.  Gentrification, redevelopment, redesign, King’s Cross, blah blah blah… But a glance at the names behind this initiative should indicate otherwise: Thomas Heatherwick, Tom Dixon and Paul Smith.  Rather than constructing glassy, new skyscrapers in an airport terminal-like complex, the team have recycled what were once coal depositories, built in 1850, into a multiuse space.  Comprised of two Victorian industrial sheds, united by a vast sweeping roof, the Yard sits on a corner behind Granary Square and has lifted King’s Cross’ game a lot higher.

Yes, there was already a lot going on in King’s Cross: Google’s new offices, Granary Square, the Illustration Museum, the Saturday market.  But this new shopping, dining and cultural destination is home to brands you’d enjoy spending a lot time in: Margaret Howell, Wolf & Badger and of course, Tom Dixon, to name just a few.  These are the kinds of shops that you want to allow yourself plenty of time to browse in pre- or post- lunch/dinner. 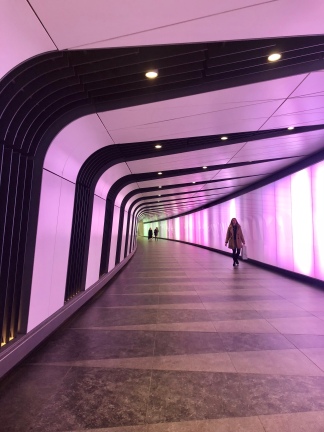 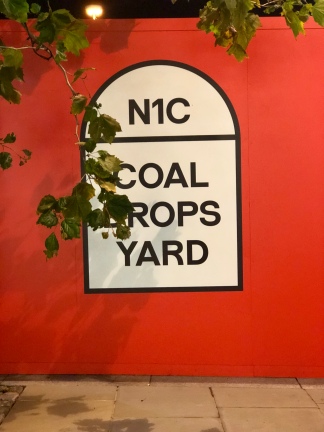 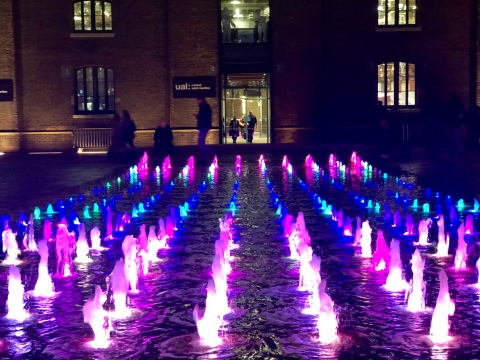 And onto the dining scene, Caravan and Dishoom, to take a couple of examples, were already good.  Granger & Co is also a favourite, don’t get me wrong.  But now, with the likes of Barrafina, Casa Pastor and excitingly, the Palomar group’s The Coal Office, things have definitely gotten better.  And sitting on top of lifestyle store Wolf & Badger, we have “hicce”.  No capital intended. 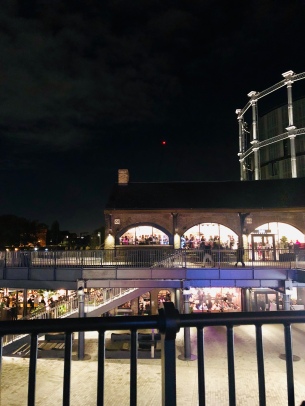 A week after Coal Drops Yard’s opening jamboree, my companion and I slipped into hicce’s soft launch with a reservation.  That’s a big tick to start: a trendy, new restaurant that you can actually book, even for a party of two.  Because two people’s time is still valuable.  Better still, you can book stools at their kitchen counter, which is exactly where my companion and I sat perched for the evening, securing a front-row view of all the kitchen action.  So exciting was it that I didn’t mind that my companion was 20 minutes late for dinner.  I sat stunned by the kitchen’s open flames – fitting for Diwali and all that – and its tight organisation, with Pip Lacey at the front of the pass all night. 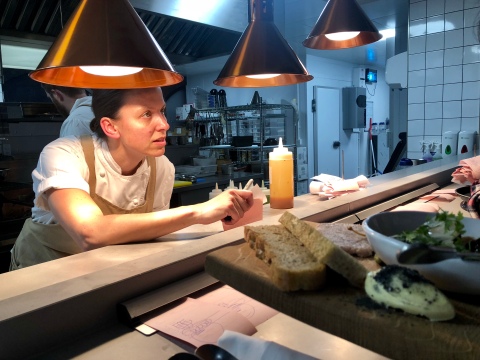 Former Great British Menu winner and Angela Hartnett’s head chef at Murano, Pip Lacey has set up shop with business partner, Gordon McIntyre.  Within the Yard, it occupies one of the most prominent listed buildings and its fittings are equally top notch: well-designed Ercol-like chairs, Tom Dixon toiletries, soft wood.  The centre of the restaurant seems to be the drinks bar, with tables dotted around it, but the real fun of this place is the kitchen and it was great to see Lacey herself perfecting each dish, checking it before it went out and preparing the hot sticks over the holm oak charcoal.  In keeping with the theme of recycling, hicce uses wood fire as fuel for all its cooking. 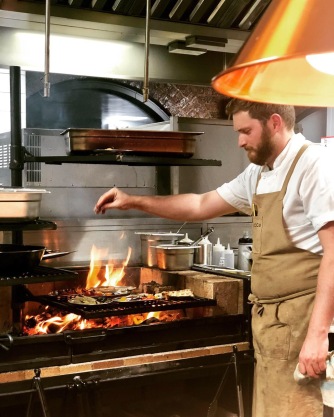 Serving modern dishes, cooked over an open wood fire, the menu is split into three parts: platters you can make-up how-you-like – including breads, apple chutney, cheeses, charcuteries and pickling jars, followed by hot sticks and small plates to share.  Having watched all the fun of the fare for almost an hour and probably seen every dish on the menu plated up, I was ready to graze, Nordic style. 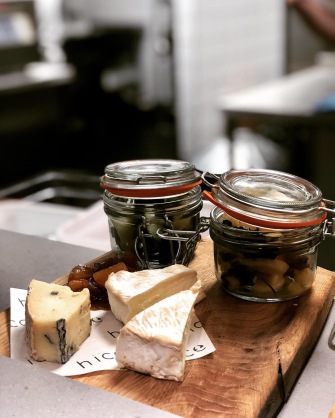 We went for the homemade rye (£2) alongside a jar of parsley root and cavolo nero (£3).  The rye was exactly the kind of bread I’d hoped for: chewy, a depth of flavour, robust.  Served with a scoop of butter topped with charcoal power, this added a totally new dimension and paired alongside the pickling jar, the combo had a kind of Japanese/Norweigan umami quality.

Onto the sharing plates proper, as all veggies dishes sounded totally inventive and unique, we went for all three.  First came the brussel sprouts, hazelnuts and kohlrabi (£6), which certainly got me into the festive mood.  Although often discarded as a Christmas side, here they’d been grilled, which gave the whole dish that smokey quality which I love.  The nuts added a further welcome crunch whilst the kohlrabi continued that umami, je ne sais quoi, theme of the evening.

Then arrived the beetroots, black garlic and grapes (£7).  I find the idea of grapes in savoury dishes totally inspired.  I’d recently bookmarked Anna Jones’ recipes for grapes in the savory context (on which, see here).  Paired with beetroot, the sweetness of each ingredient offset each other very well, giving a delicate, but distinctive flavour.

Finally, came the celeriac, chestnut and nasturtium (£7).  The celeriac had been chargrilled to perfection: it arrived with well-marked griddle lines, testament to its BBQ cooking.  Whilst the celeriac could’ve done with a sauce – perhaps their hazelnut pesto – the three ingredient theme of the dish is in keeping with hicce’s approach to food: simple, well-executed and precise.

Like the space it occupies, hicce is exciting and bursting with creativity and possibility.  Although the term translates from latin as “current, of the moment“, I hope it has greater staying power than that. 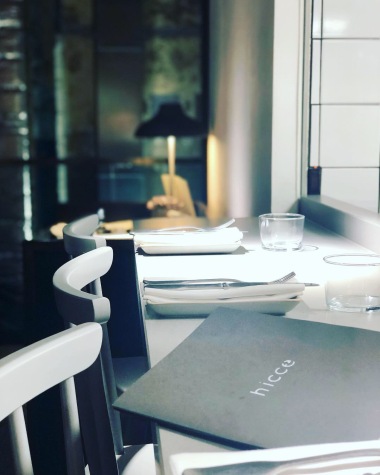 Published by About me

Welcome to Yumtini, a journal of my adventures across the foodscape of London and beyond. Covering cafés and restaurants (Eating out), coffee hot-spots (What’s brewing?), products that I love (Yummies) and food that I cook (Eating in), this blog is a creative outlet in which I can share the things I enjoy in life: food, photography, London and travel. As I work in the City, I also recommend grab-and-go lunch spots, as well as recipes for quick bites you can rustle up yourself. View all posts by About me

Welcome to Yumtini, a journal of my adventures across the foodscape of London and beyond. Covering cafés and restaurants (Eating out), coffee hot-spots (What’s brewing?), products that I love (Yummies) and food that I cook (Eating in), this blog is a creative outlet in which I can share the things I enjoy in life: food, photography, London and travel. As I work in the City, I also recommend grab-and-go lunch spots, as well as recipes for quick bites you can rustle up yourself.